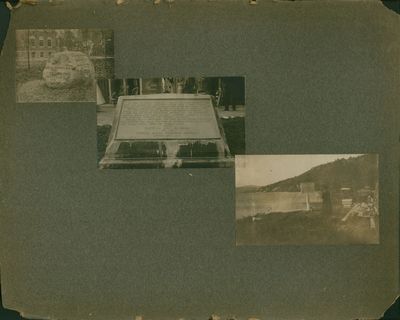 A collage of 3 photographs showing commemorative stones at Ticonderoga. The first photograph in the upper left corner is entitled "Glory to All", it is a boulder carved with the names of historical figures that played a role in the battles around the Lake Champlain area. The middle photograph is an image of a monument opposite the location of the site of a mill that was used to mill the timber for the construction of Fort Carillon, later named Fort Ticonderoga. The third photograph in the bottom right is of a woman dressed in dark coat and hat standing with flowers at the spot that is marked as the location that Lord George Howe fell during the battle of Fort Carillon during the French and Indian War. Each photograph is approximately 3.5" x 5"