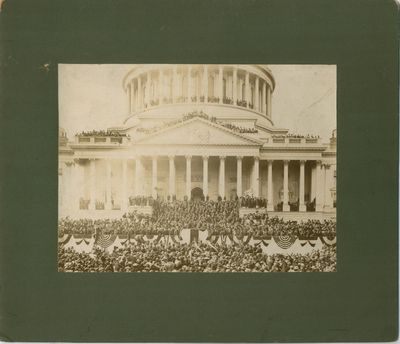 Exterior portrait of the United States Capital on the occasion of honoring Admiral Dewey for his victory at the Battle of Manila. President William McKinley and Admiral George Dewey on platform stage at front of the capital steps. Senator and representatives on either side of McKinley and Dewey. Crowds of people in foreground of photograph and in balconies of the Capital building. Inscribed on the back of the photograph "Oct. 2 1899 President McKinley, Admiral Dewey & Cardinal Gibbons on the stand in front of the Capital of the U.S. Senators & Representatives on either side. C.M.S." 8" x 6"