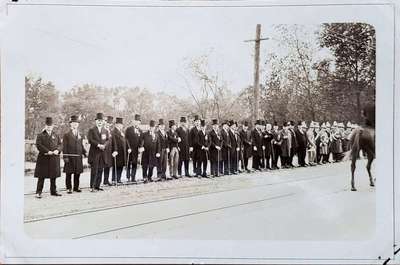 47 images from the celebration of the 25th anniversary of the Union Saint-Jean-Baptiste d'Amérique. Originally housed in photograph album. The parade passes by Main Street storefronts in Holyoke. Photographs include images of parade floats, thousands of people and dignitaries viewing the parade and taking part in other ceremonies to mark the day. Also included are photographs of school children, drill teams, soldiers, and women groups. Also includes photographs of possible erection and dedication of the crucifixion statue in Three Rivers, Massachusetts at St. Anne' Parish. This is some speculation on the catalogers part through research and finding a similar statue on the Internet located near Holyoke, Massachusetts. Each photograph is 5.75" x 3.75"