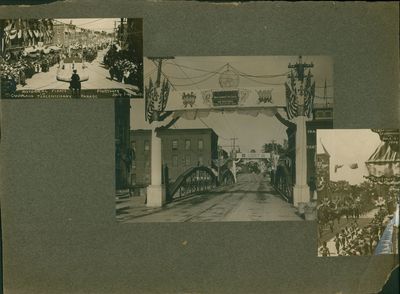 A collage of 3 photographs of the parade celebration in Plattsburgh, New York that took place on July 7, 1909. The first photograph in the upper left corner is a described as historical floats also, allegorical floats. The second photograph are images of triumphal arches built for the parade route. Arches are decorated with American flags and fleur-de-lis. At the upper center of the arch a plaque reads "Samuel de Champlain WHO CARRIED THE CROSS [?] THE CHARTLESS UNKNOWN AND DISCOVERED THIS MATCHLESS SEA" The arch further down the street has a plaque that reads "TO ARTISANS CRAFTSMEN AND TILLER OF THE SOIL WHOSE SKILL AND INDUSTRY DEVELOPED THIS FAIR LAND" The third photograph in the bottom right corner is an image of the Canadian troops marching the parade route. First and third photograph are approximately 3.5" x 5", the second photograph is 8" x 6"