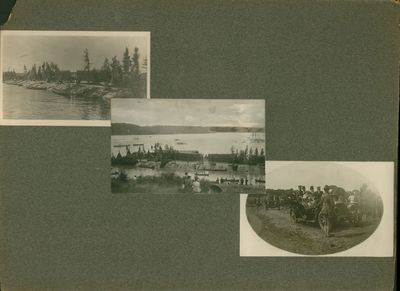 A collage of 3 photographs. The photographs depict a show called "Hiawatha" held in honor of Presidents Taft's visit to Lake Champlain. The first photograph in the top left is an image of a re-creation of an American Indian village. Canoes, tepees, and people dressed in traditional American Indian clothing are pictured in front of a stockade fence and along an inlet of a large body of water, most probably Lake Champlain. The second photograph is an image of the same village but from further away and different view point. Lake Champlain can be seen in the background with sailing boats, steam boats and canoes in the water. The image also includes spectators of the show sitting on a hill above the village. The third image in the bottom right corner is President Taft driving to the show in an open vehicle. Many people standing on side of dirt road on which the president is arriving, also many other cars following behind his vehicle. Each image is approximately 3.5" x 5"