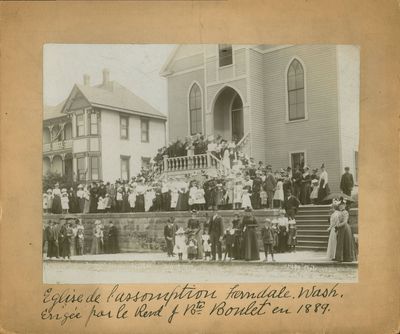 Photograph is of a wooden church surrounded by dozens of people, priests standing on balcony on front of church. Men, women, and children all dressed in formal attire. The English translation of caption reads, Church of the Assumption Ferndale. Wash. Erected by the Rev. J Bte. Boulet in 1889. Writing on photograph "'Souvenir' Silver Jubilee July 19, 1899" Also written on photgraph "Hegg Photo, New Whatcom, Wn." See notes for more information on location and name of the church. 9.5" x 7".

It is unclear to the cataloger if the location of this church is in Bellingham or Ferndale. When verifying the information on the image the cataloger discovered that Fr. Boulet built a church called the Church of the Assumption in Bellingham in 1889. Not in Ferndale as the caption on the photograph states. According to the “Indian Sentinel”, published by the Bureau of Catholic Indian Missions, Washington, D.C. Fr. Boulet did not move to Ferndale until 1904, and he had already built St. Joseph Church before moving to Ferndale. The reference to a "Silver Jubilee" refers to the 25th anniversary of the ordination of Fr. Boulet.

Additional Files
Church of Assumption Ferndale_back.jpg (386 kB)
Back of photograph